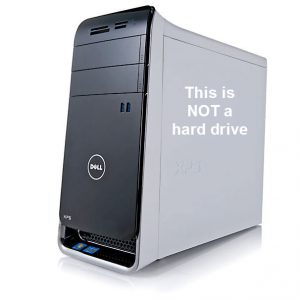 For a member of the older generation, I’m neato. I’m boss. I’m “what’s happening.” (Not even close.)

It has always amused me when people think they’ve “cracked the code.” When they think they can “speak your language” because they’ve come to understand the jargon, slang, technical terminology, or esoteric language, of your age group, profession, or subculture (I know, some of those overlap).

One of the characters on TV’s NCIS, Ziva David, constantly uses American English idioms (she is a native Israeli on the show) and constantly gets them wrong, to the amusement of the other characters, and, presumably, the viewing audience. (Side note to NCIS producers: BRING ZIVA BACK!!)

As a computer “techie,” I run into this all the time. Three quick examples are the words, “download,” “CPU,” and “hard drive.” But those are just the tip of the iceberg.

Several years ago, when I was refurbing old computers and selling them, I got a call from a woman who wanted a computer for her kids. I would always ask how the computer was going to be used, so that I could tailor it to the users’ needs. The woman went out of her way to let me know she was “computer savvy,” and replied as follows:

“I want a computer with everything! I want ALL the RAMs and hard drives!
I’m user friendly, and I want my kids to be user friendly too.”

Like any parent, I have always had dreams and aspirations for my children. But NONE of them involve them being “user friendly” in any form or fashion!

People use the term “download” now for pretty much everything.

“I put the disc in, but I couldn’t download it into my computer.”

“I’ll download that picture to you by instant message.”

“God downloaded that idea to me this morning.”

To “download” actually means to receive a virtual “package” of information through a digital electronic process. “Upload” means to send something through a similar process.

To show they are “in the know,” the public has decided, somewhere along the line, to refer to the computer tower of a desktop computer as a CPU, or, just as often, a “hard drive.”

The CPU (Central Processing Unit) of a computer is actually the processor – the chip that provides the computer its “intelligence,” or ability to process data. It is NOT the whole machine.

The hard drive (or hard drives – there can be several in a given system) is the part in the computer where data is stored or recorded. The hard drive contains magnetic discs and is another form of magnetic media like tape, and, like tape, has to be read by “read heads.” (A more recent type of hard drive is called “SSD” or “solid state drive.” An SSD is essentially a memory chip, like a flash drive. Because it is not the sort of magnetic media that has to be accessed by finding the data on the drive through read heads, access to an SSD is almost instantaneous.)

Perhaps this handy chart will help. 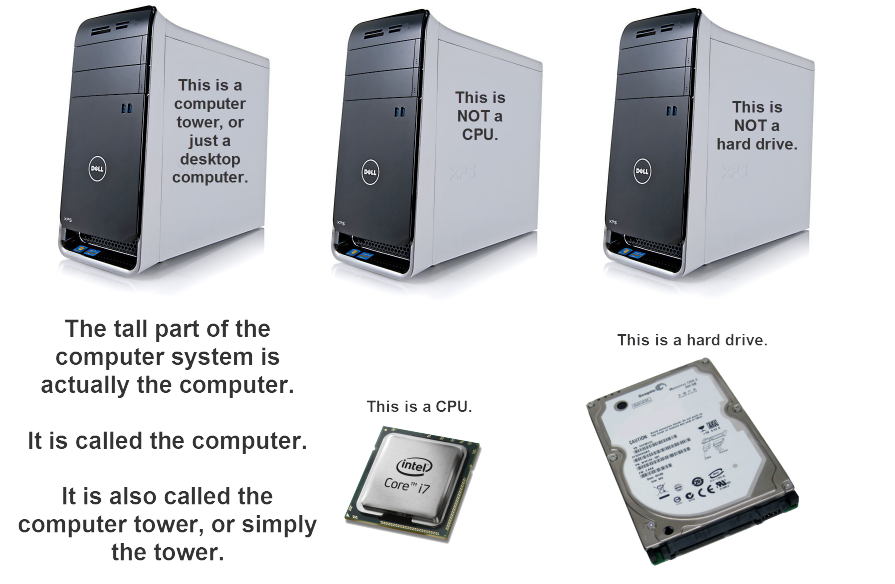 Armed with this simple knowledge, you can now “talk tech” like a pro. You can use technical language like, “I’m having trouble with my computer (and smugly think to yourself, ‘the big tall part’). I’m wondering if it could be the CPU that’s the problem (almost never is), or perhaps the hard drive.”

Your computer repair person will marvel at the ease with which these technical terms roll off your tongue.

And while you’re feeling really good about cracking the techie “code,” don’t forget to teach your children how important it is NOT to be user friendly!