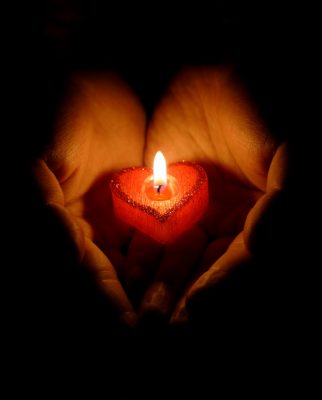 The first Christmas – the one when Jesus of Nazareth was born – occurred in the shadow of vicious hatred, racism, and fear. A candle lit in the midst of utter darkness. A tiny light of hope under a pervasive, ominous blanket of evil.

Rumors of a newborn king found their way into the inner chambers of the heartless totalitarian leader of an oppressive regime, and provoked the ruthless massacre of little boys two years old and under throughout the land – to placate his own tyrannical insecurity, and eliminate all potential opposition.

But Love, even when embodied in the fragile, helpless form of a tiny infant, will not be snuffed out. Like the miniscule atom, which, when split, explodes beyond any imaginable limit, the light of Love shatters the stifling darkness with a brilliance that cannot be contained. And that little baby escaped the brutal slaughter, and changed the world – igniting that same Love in countless others.

The birth of the Christ. Born out of wedlock to working class parents, members of a hated race of people who were awaiting deliverance from the soul-crushing tyranny of an authoritarian empire. Unable to secure even a warm, reasonably clean place to rest and be born after a long journey. Quietly, ignominiously, unceremoniously entering the world as a painter would enter (if he could) his own handiwork. And finding opposition at every turn.

Though that birth passed for the most part unnoticed, it was made known to ordinary shepherds – common men who were permitted to witness the celebration of the Armies of Heaven: the angelic beings who were sending off their Champion. They announced the true message of His arrival – not condemnation as one might expect, but “Peace on earth, goodwill toward men.” This Goodwill is not a thrift store. It is the beneficence of a magnanimous God to undeserving mankind. It is the promise of hope in the midst of darkness.

A family forced to flee their homeland and live as refugees until the murderous shadow had passed. Then returning to Galilee to live very ordinary, very conventional Jewish lives.

Eventually, the day would come when, at the age of 33, that little boy, now a man, would begin to challenge the hatred and bigotry of that totalitarian rule, as well as the hypocritical religious leaders of his own people. No corner of darkness was (or is) safe from being exposed by that penetrating light.

But always, that which exposed (and exposes) the darkness was the light of unconquerable, unflinching, unconditional Love.

I love that the Light of the World came under the ominous blanket of oppressive darkness.

“In the beginning the Word already existed.

The Word was with God,

and the Word was God.

He existed in the beginning with God.

God created everything through him,

and nothing was created except through him.

The Word gave life to everything that was created,

and his life brought light to everyone.

The light shines in the darkness,

And now, here we are, hundreds and hundreds of Christmases later. And we still celebrate the coming of the light of Love under the blanket of darkness – the cloud of hatred, racism, and fear. It seems that those are never eradicated. But they continue to be overcome by the power of unconquerable Love:

Love for the weak,

Love for the hopeless,

Love for the broken,

Love for the oppressed,

Love for the hungry,

Love for the homeless,

Love for the hurting,

Love for the imprisoned,

Love for the broken-hearted,

Love for the grieving,

Love for the sick,

Love for the refugees,

Love for the needy,

Love for all who need it and deserve it.

But also Love for the oppressor,

Love for the perpetrator,

Love for the murderer, the thief, the liar,

Love for the torturer,

Love for the merciless,

Love for the abuser,

Love for the tyrant,

Love for the brutal and the ruthless,

Love for all who need it and DON’T deserve it.

Because none of us really do.

So we celebrate this Christmas, as millions have done down through the ages, under a cloud of darkness, but with the hope and assurance that the resplendent light of Love that invaded our world can never be extinguished.