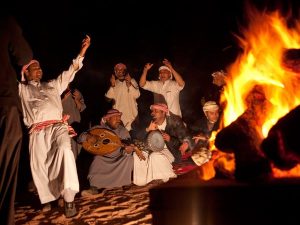 I didn’t grow up in a “musical family. “

We weren’t the Von Trapp family, the Cowsills, or the Partridge Family.
But there was always music in our home.

When it came to singing, Dad couldn’t carry a tune in a bucket. But he could whistle right on key – all the time. I don’t know if Mom could whistle or not, but I know she never did. But as she went about the work of a stay-at-home-mom and “housewife” of the ‘60s, she sang her heart out. And I loved it.

She had a beautiful voice and loved the “standards” of the ‘30s and ‘40s. I loved to hear her sing. Then somehow, we acquired an upright piano, and I discovered she could play – and play pretty well! I had no idea. Each evening, between about 7:00 and 8:00, she would go down to the basement, where the piano was, and play several songs from the stack of sheet music she had. (Where did that come from? I don’t know.) Then she would always finish with ad-libbed “boogie woogie” played by ear, with no sheet music at all. She had the gift of music “built in.”

Somehow, from these two, I was blessed with both an ear and an aptitude for music. It’s woven into the fabric of who I am. It’s not an accessory, not an add-on, not an option – it’s built in. I could no more exist without music than without air or water. It’s part of what defines me.

Those who are simply appreciators of music, “music enjoyers,” don’t understand that. They don’t get it. They consider music “something nice to have around sometimes.” They can take music or leave it.

I can’t do that. Music is no more an option for me than my sense of humor. It is one of the “few necessary things.”

All of that raises a question which I have never been able
to answer authoritatively.

Here is my “logic path” to that question:

So here is my question:

Why do the Gospel accounts never mention
Jesus singing or playing music?

Here is God incarnate wandering as a nomad with twelve companions throughout the regions of Galilee and Judea, with “no place to lay His head.” Sleeping under the stars. Camping by the lake.

Clearly He spent much time teaching those twelve men, answering their questions, etc. But were there no “campfire songs”? Did they never sing worship songs together? Did no one carry so much as a ukulele to lead music as they gazed up at the millions of stars that Jesus Himself had spoken into being?

Everything about that scene cries out for a soundtrack. Where is the music?

There are a couple of possibilities.

One is that music was so woven into the tapestry of daily life among the Jews that it simply didn’t need to be mentioned. This is actually a pretty good possibility. Many acts of daily devotion, prayers before meals, celebrations of feasts, worship times at the synagogue, etc. were marked by the singing of prayers and hymns. The Hebrew tradition is replete with the “Songs of Zion.”

In fact, one of the most poignant Psalms describes “the day the music died” in Israel – when they went into captivity. Psalm 137 describes their heartbreak as the Babylonians took them captive and mocked their musical tradition:

“Beside the rivers of Babylon, we sat and wept as we thought of Jerusalem.
We put away our harps, hanging them on the branches of poplar trees.
For our captors demanded a song from us. Our tormentors insisted on a joyful hymn: “Sing us one of those songs of Jerusalem!”
But how can we sing the songs of the Lord while in a pagan land?”

The sentiment, if not the ethnic style, is captured faithfully in the song, “On the Willows” from the musical, “Godspell.”

Another possibility is that the writers of the Gospels, in recording all that Jesus did and said, were more concerned with the content of His teachings rather than the methods he used to deliver them. In fact, the apostle John says in the last verse of his gospel (John 21:25),

“And there are also many other things which Jesus did, which if they were written in detail, I suppose that even the world itself would not contain the books that would be written.”

The best explanation is probably a combination of those two.

For example, here is a list of all the things that we know for sure that Jesus ate during his 33 years on earth:

Undoubtedly there many more foods He ate (He would have eaten a fig, but the tree did not cooperate), but these are the ones that are specifically noted in the gospel records. The Passover and other feasts are traditionally observed with specific foods, but, again, those are not mentioned specifically in the gospels, so we are left with inference.

What I’m getting at is that the fact that the scripture doesn’t specifically mention Jesus singing doesn’t prove that He didn’t. It also doesn’t mention the frequenting of “rest areas” during their wanderings, washing their clothes, bathing (anything but feet), or any of a hundred other elements of daily living.

I see Him as a small boy with His mother, Mary, singing childish songs and rhymes with laughter in His eyes. I see Him singing along with His stepfather, Joseph, as he helps him in his woodshop. I see Him holding hands with His earthly siblings, singing songs of thanksgiving to His Father. I see Him joining in the singing, music, and dancing at wedding feasts and other celebrations.

And I see Him, maybe when no one is watching, singing together with the morning stars a song as old as creation itself in a language as ancient as the heavens, and a melody that can only be heard in the heavenly realm.

Because music is such a part of me, I love that the Bible frequently commands us to sing. And, I love that it tells us that God “sings over us,” whatever that means.

How precious are the promises in these verses from Zephaniah 3 (remembering that WE, the New Jerusalem, those who are “grafted in,” are heirs of the promises of Israel as well):

Be glad and rejoice with all your heart, O daughter of Jerusalem!

For the Lord will remove his hand of judgment and will disperse the armies of your enemy.

And the Lord himself, the King of Israel, will live among you!

At last your troubles will be over, and you will never again fear disaster.

On that day the announcement to Jerusalem will be,

For the Lord your God is living among you. He is a mighty Savior.

He will take delight in you with gladness. With His love, He will calm all your fears.

He will rejoice over you with joyful songs.’”