Home > Life with God > Music > Observations / Reflections > Welcome to the Hotel California (what a nice surprise!)

My friend Deny (pronounced Denny) says that the best rock song ever recorded is the Eagles’ Hotel California. I’m inclined to agree.

This dreamscaped narrative takes the listener through a fascinating series of “scenes.” In case you haven’t ever heard it (wait! – REALLY? You haven’t heard it?), the narrator is growing weary as he nears the end of a long day of driving. It’s dusk and he’s looking for a place to stop for the night. A hotel comes into view, and he thinks to himself, “This could be Heaven, or it could be Hell!”

He finds the hotel is attractively appointed – very beautiful (including the comely female proprietor) and full of amenities. 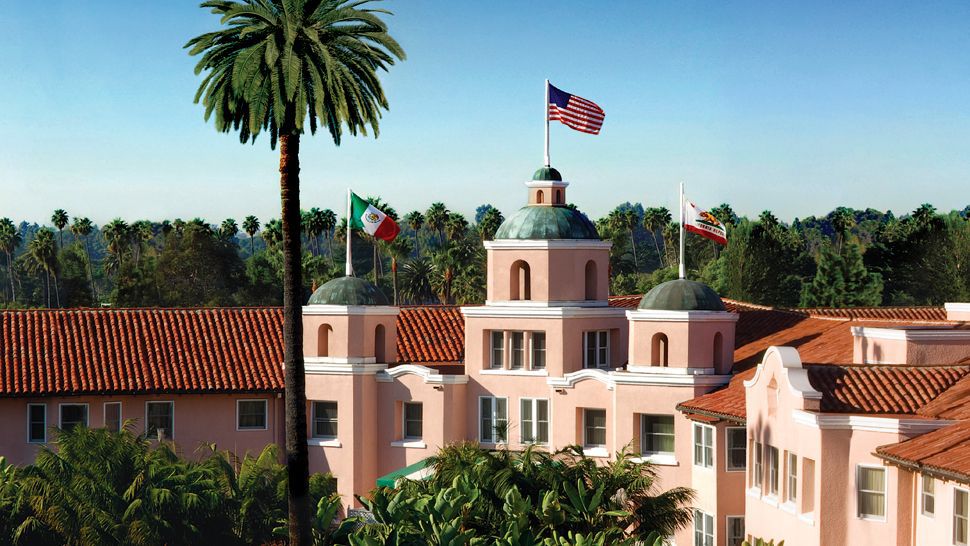 But he soon finds out that things aren’t quite what they appear. Starting with the captain’s failure to accommodate his beverage request, it becomes increasingly clear that something is strangely out of kilter there.

Shifts of scene from one place in the hotel to another, with increasingly nightmarish activity, cause the narrator to become increasingly alarmed, until finally, in a panic, he runs headlong for the door to escape. He is met there by the desk clerk. “Relax,” said the night man [in an ironically soothing tone, I’m sure] “we are programmed to receive.” And then the terrifying final line:

“You can check out any time you like. But you can NEVER LEAVE!”

I remember the impact of that final line the first time I heard it. It is shocking! Absolutely stunning. It hooks into a place in the human emotional experience where we’ve all been at one time or another. Trapped. Locked in. Stuck. Without any avenue of escape. Doomed.

People by the hundreds of thousands are feeling that right now – even as I write this.

Now I’m not one of those Christians who believes that if we really have faith, God is going to scoop us out of every difficult circumstance and carefully set us down in a lush, verdant meadow with the songbirds chirping and the butterflies flitting by. Where “troubles melt like lemon drops,” etc.

Sometimes He has us lying down in green pastures and leads us beside the still waters. Sometimes He restores our souls. But other times He walks with us through the valley of the shadow of death.

But he walks with us. AND THAT’S GREAT NEWS!

He is a God of extra chances, new beginnings, transformations, new creations – the new thing, the hidden manna, springs in the desert, immeasurably more than all we can ask or imagine! Grace, grace, and more grace.

And one day, when we are weary and looking for a place to stay for all eternity, He has a home for us. With Him.