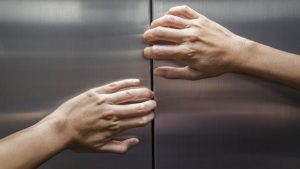 It was 1980 and I was working at San Jose Hospital in San Jose, California. I had a new wife, a new baby boy, and the future was glowing with promise.

Hospitals are busy places, and seconds can mean the difference between life and death. San Jose Hospital, for that very reason, had installed the fastest elevators I’ve ever experienced. They could be a little, well…sudden.

I worked the evening shift, as I was going to Bible College during the day, and it was late one evening when I got on an elevator to go down several floors. Suddenly the elevator was in “free fall” and, as my life flashed before my eyes, the brakes finally took hold. The stop was abrupt and jarring. That’s when an abrasive male “robot” voice came blaring out of the speaker in the elevator:

And armed with that reassurance, I was suddenly flooded with a peace and inner calm that…No, that didn’t happen. When the doors opened, even though it stopped at a place several inches below the level of the floor, I shot out of there like a bat out of – well, like a bat out of a place where bats don’t want to be.

If I am experiencing the life-threatening “technical difficulties” of a malfunctioning mechanical device, I want a HUMAN BEING reassuring me – not a robot trying, without success, to play a recording that’s designed to tell me how to feel.

Now it’s 2016, and the machines have taken over.
No, seriously, they have.

All the calls I get on my “land line” are from robots. They deliver messages (mostly spam) that I cannot verbally respond to, and then many require an answer from me which I give by pushing a button on a machine. It’s machine to machine, and I’m just the middle man. I should just get out of the way and let them talk. And I’m paying money every month so they can do this. 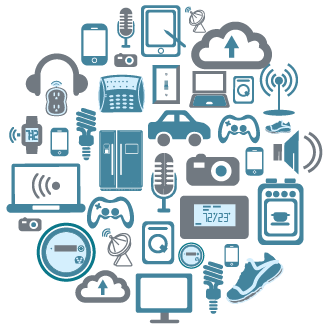 Then there’s the “Internet of Things.” Your cell phone can talk to your car, your TV, your DVR, your garage door opener, your home security system. And who knows what they’re plotting when your phone is in your pocket or purse!

Of course, the greatest evidence that the machines have taken over is the pervasive, ubiquitous, and constant use of cell phones. Everybody has a cell phone in their face. Whether they’re out for a walk, pushing a stroller, shopping at the mall, or working at their desks – there is a cell phone right there in front of them. And no one is talking on their phone – except those who are driving, in the checkout line in front of you at the store, or at the table next to you at the restaurant.

But back to the elevator…

Do we really believe that we’ve come so far in 36 years that machines can’t malfunction?

PLEASE!! I’m a computer technician (among many other things). And if I’ve learned one thing through my decades of computer repair, it’s the 100% rule:

Scientists say we are only a few years away from commercial drone passenger flights.

ARE YOU KIDDING ME? Where’s the drone that’s going to be the “Sully” and make the call to “land” (and successfully do so) the passenger drone in the Hudson river. What about hackers? Every kind of computerized device can be hacked, because humans created the operating systems, and humans are imperfect.

Google, Tesla, and others are well on their way to making this a country of cars that drive themselves. Does anybody else think this is a really BAD idea?

So when your car is driving you down the interstate, after you’ve told it where to go, and you’re texting with your garage door opener, and your airbag deploys – DO NOT BE ALARMED!! We are experiencing tech…DO NOT BE ALARMED!!