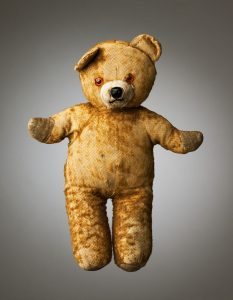 I was stuffing the toys back into the toy closet after a visit from grandchildren when I suddenly became aware that I was being watched. Peering at me from the back of the closet was a teddy bear – a little bit frayed and tattered, but well-loved. As I focused my attention on him, all at once he faded into a memory and I was transported back in time 39 years to a hospital in San Jose, California.

I have seldom been able, in my life, to follow a conventional path to any goal, and a college degree was no exception. Ten years and four schools since I had embarked upon that path, I found myself attending San Jose Bible College, newly married (one year) to my life’s greatest blessing, my wife, Rosie, working to support my little family and get myself through school, and excitedly anticipating the imminent arrival of my first child.

I had some experience in hospital work, so I took a job working at San Jose Medical Center, a large hospital facility in the heart of downtown San Jose. I was a combination orderly/transport technician, and, since I attended classes in the daytime, I worked the evening shift with a team of about six men to cover the needs of this massive urban hospital.

One of my co-workers was Dave. Dave was an upbeat, gregarious, and kind mid-30s fellow for whom the glass was always more than half full. A single man who lived with his best friend (since childhood), he loved life, his roommate, and his girlfriend. He was a delight to work with, though some of our co-workers considered him just a little bit overly chatty. Easygoing and steady, Dave was solid, reliable, and a favorite of the patients we served, especially the little old ladies, who responded with giggles to his compliments and “flirtatious” teasing. But no one would have marked Dave as exceptional – at least not until That Night.

It was, to all appearances, just another night at the hospital. But, unbeknownst to us, in another part of the facility, a tense drama was unfolding, and lives hung in the balance.

Apparently an angry man, enraged by something pertaining to the care of a family member, in an effort to “lash out” at the hospital, had grabbed a young woman who was visiting, taken her hostage, and had marched her up to the roof with a gun pointed at her head, in full view of all the patients and visitors. He was threatening to do her harm if his complaints were not attended to. The poor woman was frightened out of her wits and was becoming hysterical.

Dave was working an assignment on that floor and seeing the whole thing unfold, he followed the man up to the roof, where he pleaded with him to release the woman and talk it out with him. But the man would not be persuaded and continued to demand to be heard by the hospital administration.

At this point, Dave begged the man to allow him to trade places with the woman: “I get it. You need a hostage to make your point. But please let me take the place of this poor woman. You’re scaring her to death!” Finally, the man was persuaded to release the sobbing woman, and allow Dave to take her place.

The man was clearly unhinged, and it was another three hours before hostage negotiators were able to take the man into custody, and secure Dave’s release. Three hours with a gun pointed at his head, at his own insistence – a gun in the hands of an unbalanced, unpredictable gunman. It must have seemed like an eternity.

As news of the situation began to trickle down to the other departments in the hospital, and we learned of this courageous thing Dave was doing, we worried, we prayed, and we acquired enormous admiration for this ordinary guy who had displayed such incredible courage in offering himself in the place of another.

When it was all over, Dave insisted on coming back to us and finishing his shift, though paramedics and his boss urged him to go home. He was still shaking from the experience.

There are tremendous life lessons here, which are obvious. I could sermonize, comparing Dave’s brave offering to what Jesus did for us on the cross. I could put Dave on a pedestal as a hero – an ordinary man who exhibited extraordinary courage in the face of a perilous situation. And such accolades are well-deserved. But Dave disavowed any such talk. As far as he was concerned, it was “what anybody would have done” in his place. It was “the right thing to do.” And he never wanted to speak of it, or hear about it, again.

So I’m going to let you draw your own conclusions, and make your own life applications.

A few days later, my son, Eli was born at that same hospital. Dave was the first of our crew to visit Rosie and the baby, and in addition to his sunny presence, he brought a gift – a teddy bear. “I want you to tell Eli that I gave him his first stuffed animal. Congratulations!”

I’m glad we still have that bear. And I’m glad he caught my eye. And I’m glad I got to remember Dave again. And how the ordinary and extraordinary intersect in our lives and touch us without our even knowing it. Thanks again, Dave, wherever you are.