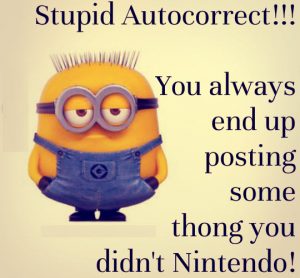 Please get your right hand ready, and indulge me in a little “show of hands” survey.

All right. Show of hands.

Thank you for your kind cooperation. I think we have enough to go on here.

Autocorrect is enabled by default (and often without an option to disable) on all smartphones, regardless of manufacturer, operating system, or version. And pretty much everybody hates it.

Does that strike you as odd? It does me.

I like that it throws apostrophes in contractions like won’t and can’t, and does so correctly the vast majority of the time. But with spelling, more often than not, it changes the word I intended into something completely wrong.

>  Can you imagine using a phone that “corrects” the phone number you dialed to one that’s completely different?

>  Can you imagine using a television remote that, when you enter a channel number, takes you to a completely different channel than the one you intended?

>  Can you imagine using a messaging app that replaces the name and number of the person you are trying to text to with some other random contact in your contact list?

>  Can you imagine using a GPS which randomly “corrects” the destination you put in to someplace completely different?

You wouldn’t put up with that kind of nonsense in any other device for two minutes.

Most people LOVE their smartphones. You can tell because most of the time, they are all that people are looking at.

But most people HATE Autocorrect. Hate it!

If Autocorrect were an add-on product you could buy off the shelf, would you purchase it?
OF COURSE NOT! Nobody would.

If Autocorrect were a girlfriend or boyfriend, you would tell it, “We need to talk. I think it’s time we start seeing other people.”

If what I’ve said is true (and I think we can ALL agree that it is), then how in the world could such an incredibly defective product become the industry standard in an industry in which imprecision is not tolerated and accuracy is paramount? It’s a head-scratcher, for sure.

I see only three possibilities.

I think the third possibility is probably the most likely. Wouldn’t take much to sneak up on us. We’d never see it coming. Too busy correcting auto-corrected words.