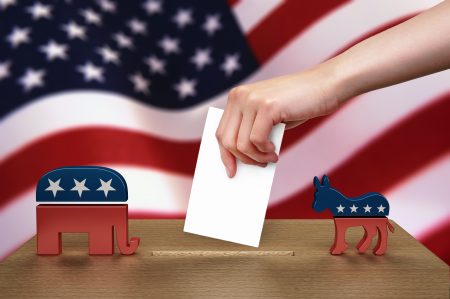 Those of us who would describe ourselves as followers of Jesus, Christians, or “believers,” believe, for the most part, that God has preferences for us in our lives. There are widely divergent views regarding what those preferences include. But we tend to use a blanket term that incorporates them all: God’s will.

Does God involve Himself in the minutiae of your everyday living?
Or is He simply concerned that you live your life in fellowship with Him and in accordance with His expressed principles and commands – leaving the details of the application of those principles to you?

The way that you answer these questions determines, to a large extent, how you live your life, and the nature of your relationship with God.

What about governmental elections?

Do you believe that God has a preference regarding who our elected governmental officials should be?
Do you believe that it is His will for you to vote along certain lines, according to certain values, or according to a certain party platform or within party lines? Would you even go so far as to say that to align yourself with a particular party’s views is to be within the will of God, and to support the other party is to be outside His will?

Do you believe that God will, if you are attentive, guide you (direct you) to vote for a certain person or a certain side of an issue?

My Christian brother or sister, there is really a lot to consider here, isn’t there?
And really, it’s just the tip of the iceberg.

The “will of God” can be quite complicated.

Think about the nation of Israel.

Israel was a theocracy – ruled by judges appointed by God Himself. The last of the judges was Samuel. Samuel was a good man, but his sons were corrupt. (You can read all about this in 1 Samuel chapters 8 through 12.) The people of Israel grew restless and thought that having a king to rule over them (like the surrounding nations) would bring an end to the corruption and to their dissatisfaction.

But God had a preference in all this. He did not want them to have a king. By choosing monarchy over theocracy, they were rejecting God Himself. God, through Samuel, warned them, saying, in effect, “Be careful what you wish for!” He listed all the bad things that would result from this change, but the people remained stubbornly single-minded. “We want a king over us,” they said. “Then we will be like all the other nations, with a king to lead us and go out before us and fight our battles.”

After hearing Samuel’s report, God said to him, “Listen to them and give them a king.”

Now here is where it gets interesting. God did not WANT them to have a king. That was NOT His plan. But even though it wasn’t what He wanted, God still had a preference as to who that king would be. Through an interesting set of events, God instructed Samuel to anoint Saul, a man from the land of Benjamin, to be the first king of Israel. You can read the rest of the story of Saul in the remainder of the book of 1 Samuel.

Israel under the rule of kings had a rocky history. The kings of Israel (and later, of Israel and Judah) were a mixed bag. Some were very good, some wise, some fair and kind. But by far, the majority were corrupt, idolatrous, and cruel. Israel ended up paying quite a price for deviating from God’s “Plan A.”

So why am I telling you all this? Simply to demonstrate that the will of God is often complex, and seldom as simple as choosing A over B. God didn’t want a king to rule Israel. But He insisted on selecting a particular man to be king, once the nation had decided to go down that road.

One important lesson from this story is that God deals with his people both individually and corporately, as “one people.” Despite the fact that there were very likely those individuals in Israel who opposed the idea of a monarchy, and wanted to continue to be ruled by God and His appointed judges, God dealt with the nation, in this case, as a corporate entity. And the ramifications of the nation’s rejection of God’s rule were experienced by individuals within that corporate entity – even those who, in their hearts, didn’t go along with the crowd. The cruelty of the bad kings was not selectively felt only by those who had rejected God. It was experienced by all the people of the nation.

The Old Testament is replete with examples of situations in which God executed His judgment on a nation or a people. This included plagues, devastating cataclysmic events, war, drought, famine, and more. Ultimately, He would have preferred to deal with each situation in a kinder way, but felt the circumstances warranted severe consequences. The “will of God” in those situations was not “sunshine, lollypops, and rainbows.” It was more complicated than that, and often tied to the nation’s faithfulness to Him.

Here’s another consideration to throw in the mix. The Bible, and the prophets in particular, tell us that a very difficult time of testing is coming in the “last days.” We simply don’t know what that means for us, for our nation, and for our families. Reprobate leaders, a lapse in morality, cataclysmic natural events, wars, and a “great darkness.” I believe that God’s agenda and purposes at any given time can look very different from what we might expect.

All of this brings us back around to voting for governmental officials in the USA. The United States is not a theocracy; it is not a monarchy; it is not a dictatorship. It is a democratic republic. The scripture tells us that God “raises up kings and brings down kings.” It tells us “all authority is from God.” But it is silent about a form of government where the people are the ultimate authority, electing officials to govern and lead.

Does God “raise up” presidents and “bring down” presidents? Ultimately, in the larger scheme of things, no one is outside of God’s sovereignty. But does God specifically appoint one man or woman to be the President of the United States? I don’t think that any of us can honestly say whether He does or not.

At the individual level, does God have a preference when it comes to the candidate for whom I vote? I would think that it is quite possible that He does.

Now here is the kicker. Is it God’s desire that all of His people (people who claim to follow Jesus Christ as Lord) should vote for the same candidate in order that God’s choice might prevail?

Now THAT is an interesting question.

I have Facebook friends who are Christians, and who, I know, are devoted to trying to follow God as closely as they can, who say that they heard from God that they were to vote for a particular candidate in this year’s Presidential election. Yet, they did not vote for the same candidate.

But isn’t it always God’s desire that the leader of a people should be a man of unimpeachable character – a wise, reputable, and godly man? Yes. I believe that is always God’s “Plan A.” But, pretty much without exception, that is never who we get.

Even the most godly leader we know about, a “man after God’s own heart,” David, was a murderer, an adulterer, a liar, a fraud, and a thief. But God can appoint and use anyone he chooses.

God’s “chosen vessels” have included (just to name a few):

This list is comprised of national leaders, executors of God’s judgment, enslavers of
God’s people, restorers of Israel, and leaders of the church. From bloodthirsty pagan kings to immoral Israelite leaders, God used each flawed individual for His specific purposes in specific seasons.

So where does that leave us? How can we, as those responsible for electing our own leaders, vote according to God’s will?

Once we have prayerfully, discerningly considered the candidates and issues, sought His counsel, applied His precepts, and voted our conscience, then we need to leave it in God’s hands – and go back to step one:

I urge, then, first of all, that petitions, prayers, intercession and thanksgiving be made for all people—for kings and all those in authority, that we may live peaceful and quiet lives in all godliness and holiness. This is good, and pleases God our Savior, who wants all people to be saved and to come to a knowledge of the truth.    (1 Timothy 2:1-3)

And this exhortation, written in the time of a very oppressive Roman emperor (Caesar Augustus) by a man (Paul, the apostle) who was often incarcerated under that authority:

Let everyone be subject to the governing authorities, for there is no authority except that which God has established. The authorities that exist have been established by God. Consequently, whoever rebels against the authority is rebelling against what God has instituted, and those who do so will bring judgment on themselves. For rulers hold no terror for those who do right, but for those who do wrong. Do you want to be free from fear of the one in authority? Then do what is right and you will be commended. For the one in authority is God’s servant for your good. But if you do wrong, be afraid, for rulers do not bear the sword for no reason. They are God’s servants, agents of wrath to bring punishment on the wrongdoer. Therefore, it is necessary to submit to the authorities, not only because of possible punishment but also as a matter of conscience.

This is also why you pay taxes, for the authorities are God’s servants, who give their full time to governing. Give to everyone what you owe them: If you owe taxes, pay taxes; if revenue, then revenue; if respect, then respect; if honor, then honor.    (Romans 13:1-7)

In wrapping this up, I feel that I need to encourage every Christian voter to resist the temptation to choose bitterness , scorn, and contempt as a response to disappointing election results. Extend grace to those with whom you differ. Relationships are more important than opinions and ideologies – let love win the day. Grace and love promote healing, while spewing forth venom and resentment only serve to further polarize and divide us.

As Brené Brown points out, we’re all pretty much doing the best we can.
Let’s choose to love one another and dispense grace.