Home > Observations / Reflections > Deciding Who Gets My Vote

[NOTE:  If you don’t like or appreciate ironic humor, you will not like this post. You’ll probably want to go back to whatever you were doing before you came here.] 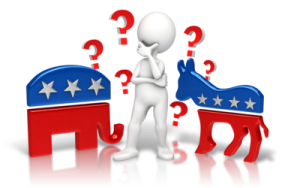 Let me begin by stating from the outset that I have been going about this thing all wrong.

Not just deciding the candidate most deserving of my vote, but life decisions in general.

I grew up believing that the best way to make a decision was to examine the alternatives, researching and carefully considering the pros and cons of each, and to choose the alternative which seemed to have the most points in its favor.

Then, when I came to know God personally, and to understand that He had preferences for the decisions in my life, I also welcomed Him into the process, seeking his input, and inviting Him to make His preferences known.

That has worked very well for me for the last several decades, but recently, I have come to understand that I have been going about it all wrong.

So here is the way the current American culture has shown me I should be making decisions.

Let’s start with money management and making purchases. First of all, it is unwise to purchase with the money I have, when I could be spending money I HOPE I will have in the future, and getting 1.5% back on all my “purchases.” So I should spend, say $1000 on my credit card, so I can get $15 back! Wow!

I’ve learned to watch for signs on the Internet. The Internet is an imaginary computer thing invented by Al Gore for advertising, retail sales, challenging other people to “like” or “share” things to prove the sincerity of their beliefs, and posting videos of animals. Posting is like putting them up on an imaginary bulletin board or refrigerator.

Here’s how the signs come to me. I visit a store like Amazon (which is a pretend store – like all Internet stuff, you can’t really go there), and I look at some winter coats. After that, no matter where I go on the Internet, I see those same coats being advertised! This HAS to be more than coincidence. It has to be a sign that I’m supposed to BUY THAT COAT, and probably use some card that will pay me for doing it. Sometimes after I buy the coat, the signs go away. But sometimes they don’t. But I don’t mind. Seeing the things I look at following me around all over the Internet just lets me know that those people in that imaginary store really care about me.

But there are other ways. Sometimes I get things in my email Inbox (email is imaginary mail – it just shows up on your computer somehow). Even though lots of times these emails are addressed to other people, or nobody at all, or a huge group of people with similar names, or sometimes, even me, and even though they have weird subject lines, are sometimes written in other languages, and make promises that sound suspicious, I always try to learn everything they teach me. Sometimes it costs a lot of money to acquire the wisdom that these emails offer, but I know it will be worth it. Like that nice lady from a royal family in an African country who just needed my help with a multi-million dollar money transfer for her royal husband. I just had to wire her $1000 and in a few days a couple million will show up like magic in my bank account – just for helping them out!

And lately, lots of my friends have been losing their luggage and money in London or Paris or some other fancy European city, and just need for me to wire them money to help them out. Well, OF COURSE I’m going to help my friends! That’s a no brainer!

I get a lot of telephone calls like that too. People who want to help me reduce my debt and pay off my credit cards. Well, not people, really. I mean you can’t talk to them, because they’re really just imaginary people – like robots or something. But it’s so nice of them to keep calling me. Every day. If they call me a hundred times or so, then I figure they’re very serious about it and dedicated, so I should probably do whatever they say.

All the charitable organizations I give money to send me mail that says (essentially), “Sure you’re giving some money, but IT’S JUST NOT ENOUGH!” We’re going to have to stop offering the services and ministries we currently offer because WE JUST CAN’T GET PEOPLE LIKE YOU TO GIVE ENOUGH!!!” This makes me feel grateful to be giving to such caring organizations, and motivates me to give more and more and more.

And then we come to election time decision-making. TV is election stuff wall-to-wall. Each day’s mail brings missives from the candidates, asking, not for my vote (that is assumed), but for my money. They just can’t do it without people like me. (I’ve never met ANY people like me – people who know me will attest to this.) Then the debates. But MOST of all (and this is really important) my friends on social media talk non-stop about why it is ABSOLUTELY VITAL that I vote for their choice.

But I’ve been watching all that, listening to all that, reading all that…And I’ve decided on an approach that fits right in with how the media, the news outlets, and my friends on social media are presenting this election and its alternatives. These are the things I’m going to weigh – the qualifications I’m going to consider, because it’s obvious that these are the things all of these sources – and the candidates themselves – WANT me to consider.

I have decided to vote for the candidate who:

Additionally, what REALLY makes me want to vote one way or the other is having my Facebook friends constantly rant about what an idiot I am if I don’t vote their way, or how contemptable the other candidate is.

Does anybody really think they’re going to change my mind if they just post a few dozen more rants or articles about what a horrible choice candidate “X” is?

Finally, as was stated in an article by Mike Rowe (yes, THAT Mike Rowe), I wonder how many of the folks who say, “I don’t care who you vote for, just GET OUT AND VOTE,” would be so enthusiastic about encouraging others if they knew that by getting those folks to the polls, their candidate would be defeated.

So, bottom line, I’m going to continue to exercise my right to “voter anonymity” and vote for the candidate whose views and platform are most closely aligned with my own, and for whom I can vote in good conscience before the God I serve.